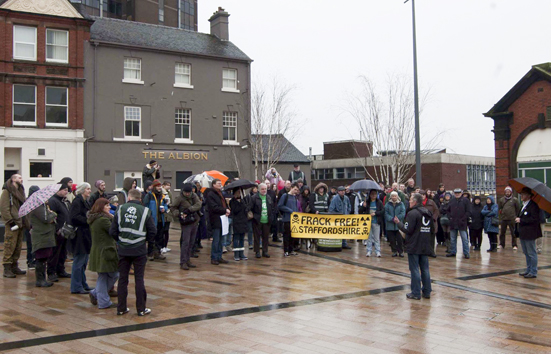 Members of North Staffs Green Party joined over a hundred campaigners from Friends of the Earth and other organisations in Hanley to protest against government fracking proposals last weekend.They were taking part in a national day of action and members involved came from across the region with representatives from Newcastle, Leek and Cannock present.

The object of the event was to raise awareness about the risks to the environment and to communities posed by fracking.

In a speech made on the steps of Hanley Town Hall Sean Adam of North Staffs Green Party and one of the organisers of the event outlined the dangers posed by fracking.

These include toxic materials brought up from underground as part of the process. He had not, he said, heard any convincing evidence from supporters of fracking that the safety measures they claim will be put in place would be effective.The process was, he went on to say, being driven by utility companies who were 'putting profits ahead of people' and were not investing in infrastructure such as piping and water treatment plants.

He also warned of the potential impact on local communities. Although Stoke-on-Trent City Council do not include the use of fracking in their energy policy there is a possibility that contaminated material generated as part of the process may be brought to a site in Middleport for treatment.

This would be, Sean said, 'another blow' to a community that had been hit hard by the decline of the pottery industry. As a result of the risk of contamination property values in the area would go down whilst insurance premiums would be likely to increase.

He added that this would also happen in areas where fracking took place and there would be additional problems caused by issues such as water shortages that would have an impact on householders.

After the event the protestors took their banner to a bridge over the A500 in Stoke to raise awareness amongst passing motorists, receiving a mostly favourable response.

Since the event local Green Party members have received messages of support from around the country and from environmental campaigners in Ireland.

Public opposition to fracking is growing, as evidenced by a survey conducted for the Department of Energy and Climate Change, 53% of the people questioned said they opposed fracking compared to 33% who were in favour.

Out of 2121 households questioned 68% said they opposed fracking on the grounds that it would be damaging to the environment, 78% of the people questioned were in favour of using wind power or other renewable sources of energy.

North Staffs Green Party Campaigns Coordinator Adam Colclough who attended the event said, 'the number of people who have come out in the wet and cold today to make their feelings known shows the deep level of public concern about this issue. We are committed to promoting sustainable forms of generating the energy we all rely on and believe that rather than ever more extreme methods of extracting fossil fuels are what the government should be investing in.'

Further events are planned throughout the year.